Want to be a certified Partner?

Then send us a message!

Interview with Ioannis from Jack The Ripper Tattoo & Barbershop in Stuttgart

Hello, Ioannis, we met shortly after the opening of your barber shop. We both knew, that such a shop was missing in Stuttgart. But step after step. Tell us something about your Barber shop and how it all started!

I’ve always dreamed of a shop for men, a shop where women have no access to, a place where men can be a men, have men’s conversations, a whisky or a beer in there hands, and a cigar to blues music and the treatment is something by the way. In short, wellness for men! The way, we men like it. That’s how Jack The Ripper was born.

A barber shop with life music and a bar would have been called a mixed business in the past, how is that going today?

As far as the serving is concerned, as long as you don’t ask for money for the drinks, you don’t need a distribution license, so the drinks and cigars are part of out treatment.

You’ve set rigourous rules in your shop. Clear lines for your customers.
What kind of customers do you love, which do you send out right away?

Yes, respect is paramount to us. I’m not interested in who you are and what you have, everyone in my shop is the same and everyone is treated equally, no matter what are the social conditions, we are like a family. If you enter our shop and don’t greet, you can immediatly leave right away, because you don’t get any service here. I love customers who have focussed on the culture of barber and know what to expect when they enter our shop. Those who pay tribute to us and our craftsmanship are welcomed to the close circle of the family and are welcome guests.

Ioannis, in addition to your work in your barbershop, you are incredibly active at festivals, motorcycle and US car meetings and have even enough time to create the gentleman’s club: whisky and cigar tastings in your shop. How do you do all this? What drives you?

Yes, it’s not always easy and sometimes very exhausting, but the passion and love for what we do and the satisfaction of our customers inspires me and gives me the energy to reconcile everything. I’ve made my passion as my profession. Nothing better could have happen to me, and of course my team, without the boys, Jack The Ripper wouldn’t be where we are today!!!

As a barber, you’re always in the centre of everything, at all the events and of course at work. Your opinion… Where are you going with the man’s style and beard? What’s up, what will stay and what’s an absolute NO GO?

The beard is a way of life! That’s not just a trend. Anyone who loves and nurtures his beard, wont be able to past a barber. The same thing counts for those who want to miss a classic men’s haircut or a traditional wet shaving with everything that goes with it and just forget the present for a certain period of time and let themselves be dropped and pampered, according to traditional barber art! An absolute no-go, pluck eyebrows and masks. We are a traditional barbershop, not a beauty centre!

Thank you Ioannis, till the next interview! 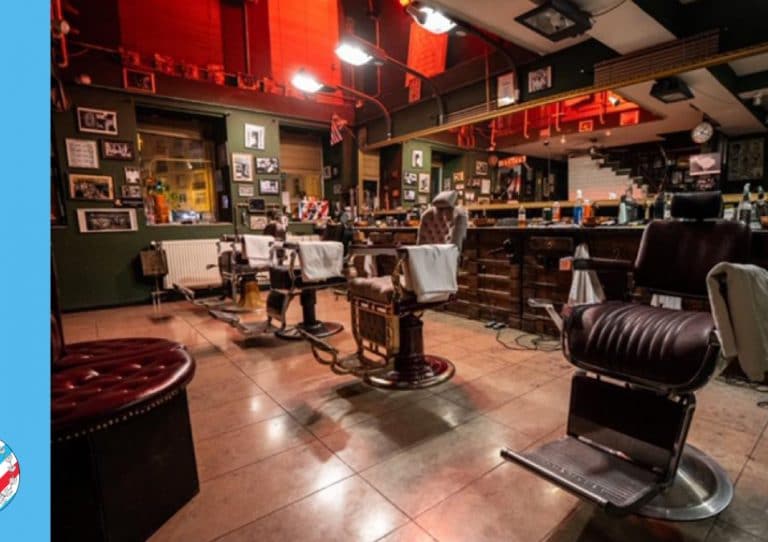 „Do one thing in life and do it right!“

His ambition to become a barber came from Alexander Vellios (known as Torreto) childhood memories.

He grew up in a small village in Greece together with his grandfather. There, they often visited the local barber shop. Through those visits, he got to know at a young age the gentlemen mentality: respect toward older people and the welcome with a handshake. Talking about the real life made such a big expression on him, that he began to think of the barber as his heroes. The way how barbers build friendships with their customers were admirable for him:

After he spent his whole childhood in Greece, his parents decided to live in Germany. Alexandros followed his parents and tried his luck in Germany. Although he couldn’t be friends with the educational system, he graduated. Afterwards he started his apprenticeship as a hairdresser, but gave up on it, because he noticed, that it had nothing to do with his childhood memories of the barbers in Greece. There are two different professions (we will explain the difference in a separate blog post – STAY TUNED). After furthermore attempts to establish a foothold in Germany, he decided to go back to Greece to join the army. There it was kind of a tradition, that the newbies have been selected to cut the hairs of the soldiers.

During this phase he got to know, how much appreciation a hair cut could earn. Even his supervisors came occasionally to get a new hair cut. After a successful time at the army, Alexandros decided to fulfill his long-desired dream: to open his own barber shop in Germany.

Thereby he always remembered the words of his grandfather: „Do one thing in life and do it right!“

He needed one year for planning and realization. With a little capital, but a strong passion and lifeblood, he finally opened his first barber shop in the Basaltstrasse 46 in Frankfurt in August 2014. There he had a back room in a hairdressing salon.

A safe heaven for real men.

Here you don’t wait until its your turn. You enjoy your whiskey and smoke a cigar during your waiting time.

With his first store in Frankfurt Bockenheim he made it possible to achieve something in a short time, that many people had previously regarded as impossible. He reanimated the forgotten craft of the barber.

After short time his barber shop boomed and it came to problems with the landlord. The lessor hadn’t told the owner of Alexandors barbershop. Additionally, Alexandros had already a big customer base, which the owner of the hair salon didn’t liked. The jealousy of the hairdresser have been confirmed in written words: ‘Cancelation of the rentabel area!’

Although he had ups and downs, he decided to hold on to his dream and looked after a new space for his barber shop. After a long search, he finally found a space near the center of the city (Alten Gasse) spread over two floors. Until today, that is the place of Alexandors barber shop: Torreto.

2019 he celebrated the fifth anniversary of his barbershop.

Want to be a certified Partner?

Then send us a message!